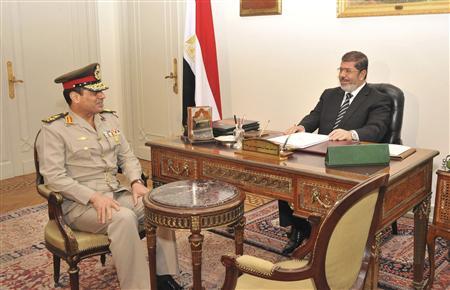 By Marwa Awad and Alexander Dziadosz

CAIRO (Reuters) - As cities along the Suez Canal erupted in violence in late January, the leader of Egypt's armed forces feared for the future of the fledgling democracy. General Abdel Fattah Sisi told the elected president, Mohamed Mursi, that the situation was critical, according to Egyptian security sources familiar with the events.

"The military leadership advised the president that national security was threatened following the chaos and vandalism that befell the cities of Suez and Port Said," a security source with links to the military told Reuters.

The two men discussed ways to contain the unrest along the Canal, which is vital to Egypt and global trade, agreeing the army could not stand by and let the turmoil spread. Early on Saturday January 26 troops deployed in the riot-torn cities; in Suez armored vehicles arrived to protect government buildings. Mursi announced a night-time curfew in the towns.

It was a telling moment in Egypt's struggle to establish a real democracy. When popular uprisings overthrew the former regime of Hosni Mubarak two years ago, the army, which had played a central role in the state for decades, determined to stand back as political parties vied for power. Many analysts believe that after Mursi was elected in June 2012, he and the military came to an understanding: the new Islamist government would not interfere in the army's interests, nor seek to change its long-standing vision of national security, while the military would give qualified support to Mursi and his backers in the Muslim Brotherhood.

But that deal has limits, as Egyptians are discovering. The army felt compelled to intervene to quell the January riots, according to security sources, though they were at pains to say it did not do so unilaterally. "The president and the national defense council made the decision to impose the state of emergency and a curfew until the situation stabilizes," said the security source with links to the military.

Security and political sources told Reuters that Sisi, the defense minister, also privately urged political leaders to set aside their differences in the face of a social and financial crisis.

Though the armed forces say they want to remain neutral, they believe they cannot ignore the situation on the streets.

"We are not political, we don't want to participate in the political situation because we suffered a lot because of this in the last six months," Major General Sedki Sobhi, the army chief of staff, told Reuters at an industry event in Abu Dhabi. "But sometimes we can help in this problem, we can play this role if the situation became more complicated."

As Egypt heads towards new parliamentary elections beginning on April 22, and as the Muslim Brotherhood and the military eye each other closely, Mursi finds himself caught in the middle.

Essam Haddad, Mursi's aide on foreign affairs, told Reuters that the relationship between the armed forces and the presidency had "been developing in a very positive direction."

An unfortunate confluence of events brought popular unrest to the boil in late January. As the country headed towards the second anniversary of its revolution, opponents of Mursi stepped up protests. At the same time a court was preparing to deliver verdicts on police, officials and other suspects charged with murder after 74 people died during a stampede at a football stadium in Port Said last year.

It was a combustible mix. When judges in the football case sentenced 21 people to death, fury erupted in Port Said. As street protests left at least 32 people dead, the army moved in. General Osama Askar, commander of the third army division in Suez, said at the time: "This is an emergency deployment to assist the police ... this is not the army's role but we are assisting the police force in imposing law and order for now."

Behind the scenes Sisi, a former head of military intelligence, went further than merely assisting the police. On January 28, according to security sources, he spoke to Mursi's political rivals in the National Salvation Front: Mohamed ElBaradei, former head of the U.N. nuclear agency; Hamdeen Sabahy, seen by some as a leftist firebrand; and Amr Moussa, a former chief of the Arab League.

Sisi treated each of the politicians with friendliness and respect, said security sources, but made his point clear: chaos in the Suez cities endangered the Canal and threatened the stability of the state. He told the political leaders they must compromise over their differences.

"The country was facing a political stalemate that had to be ended to prevent a downward spiral of events. Now is not the time to dissolve a newly elected state institution (the presidency)," said the security source with links to the military.

To ram the point home, Sisi went public with his message the next day, warning that political unrest was pushing the state to the brink of collapse. The military leadership also played a role in bringing political leaders together two days later, under the auspices of the head of the venerable Azhar university. The party leaders met and signed a document renouncing violence.

In a continuation of a system operated by Mubarak, the new Islamist government has agreed that decisions on the military budget will continue to be discussed in the national defense council, not parliament. In the council - which includes the president, parliament speaker and military leaders - security officials have the upper hand over civilian members.

The government has also guaranteed the armed forces control over provinces along the border with Israel and along the Suez Canal, according to a Muslim Brotherhood source.

Egyptian authorities announced at the end of January that shipping fees for the Canal would rise between two and five percent from May 1. The waterway is an important source of funds for the country and for the military, generating revenue of about $5 billion a year in hard currency.

On Sunday February 3, Sisi dined in private with Mursi at the president's home near Cairo. The army chief acknowledges the prestige of Mursi's position as president, said two security sources. At the same time, Mursi respects Sisi, according to the president's office, army officials and the Muslim Brotherhood source. At 59, Sisi is the youngest member of the government's military council made up of commanders from various branches of the armed forces.

"Generally, the alliance of convenience was that the Brotherhood would respect the military's autonomy, and that would include their economic position in the country, and in return the military would give up its opposition to Brotherhood rule," said Shadi Hamid, director of research at the Brookings Doha Centre, a think-tank based in the Gulf.

At present there seem few other options, said Hamid. "It's not as if there's a more stable alternative to Brotherhood rule right now or in the foreseeable future. I see no reason for the military to reduce its support for the Brotherhood or to undermine the Mursi government right now."

In Hamid's view, the street protests are a "generalized expression of anger over the status quo" but it is unclear whether they will translate into significant electoral support for Mursi's opponents. This week an alliance of opposition parties said they would boycott the parliamentary elections.

Some foreign powers appear to take the view that amid uncertain political times Egypt's armed forces remain a constant. On Tuesday February 5, then U.S. Defense Secretary Leon Panetta spoke to Sisi about the political situation in Egypt, discussing the "importance of continued security assistance for Egypt so that the Egyptian armed forces can continue to address shared security objectives while modernizing their equipment and capabilities," according to a statement issued by the Pentagon.

Egypt's military has worried that political instability might be used as an excuse by other countries to cut aid; some members of the U.S. Congress had tried to block a deal, agreed when Mubarak was in power, to give Egypt F-16 fighters. But U.S. and Egyptian officials announced this month that the U.S. had gone ahead with delivery of four F-16 fighter jets as part of their continuing co-operation.

An Egyptian military official told Reuters: "The military leadership has told the American counterparts that the armed forces is a national institution and has nothing to do with politics ... and that supplying the Egyptian army with weapons is the strongest strategic link between Egypt and the United States."