UK need to look for the root of radicalisation.

London (CNN)London police named have named a man they say was responsible for stabbing two people in south London on Sunday in what was described as a terror-related incident.

The Metropolitan police said the attacker was 20-year-old Sudesh Amman who had recently been released from prison for Islamist-related offences. He was being followed by surveillance officers who shot him dead at the scene, police said.
"Although the suspect has not been formally identified, given the circumstances of the incident, we are confident that he was Sudesh Amman," Metropolitan Police Deputy Assistant Commissioner Lucy D'Orsi announced.
Police earlier called the attack a terrorist incident and said it was believed to be "Islamist-related."

UK police named the south London attacker as 20-year-old Sudesh Amman.
Amman stabbed two people on Streatham High Road at about 2 p.m. local time before the surveillance officers caught up with him and shot him dead, D'Orsi said. She said he was wearing what was quickly established to be a hoax device strapped to his body.
Three people were taken to nearby hospitals -- two with stab wounds and another who police believe was hit by glass when Amman was shot. One of the victims who was initially described as having life-threatening injuries was out of danger on Monday, police said.
A source in the UK government told CNN that the attacker had been released from prison in the last few days after serving about half of a three-year sentence for the possession and distribution of extremist material.
Authorities had concerns about the man's behavior, including language that suggested he continued to hold extremist views, but he had to be released under current laws, the source said. He was released with strict licensing conditions, including a curfew, and he was kept under surveillance.
In apparent response to the attacker's previous terror convictions, UK Prime Minister Boris Johnson said that on Monday he would be announcing "further plans for fundamental changes to the system for dealing with those convicted of terrorism offences."
Early Monday morning, detectives from the Metropolitan Police's Counter Terrorism Command began searching two residential addresses in south London and Bishop's Stortford, Hertfordshire,
according to a police statement.
"No arrests have been made and enquiries continue at pace," the statement added.

Attack was 'very sad and also quite scary'

Gabriel Vigo, a 24-year-old security officer at London's Heathrow Airport who lives in the Streatham area, told CNN he heard a few shots. From the window of his flat, he saw three bodies on the floor.
"The road was quickly closed too and there was a body next to Boots with something that looked like a device strapped to him," he told CNN. "It was square-shaped but it looked like it was taped to his shirt."
Another eyewitness, Gulled Bulhan, a 19-year-old student from Streatham, told PA news agency that the man had a "machete and silver canisters on his chest."
Bulhan told PA he saw the man "being chased by what I assume was an undercover police officer -- as they were in civilian clothing."
The London Ambulance Service said it was called to the scene shortly before 2 p.m.
"We worked closely with the other emergency services and sent a number of resources, including five ambulance crews, an advanced paramedic practitioner, an incident response officer and a motorcycle responder, with the first of our medics arriving in four minutes. We also dispatched London's Air Ambulance," a statement said. 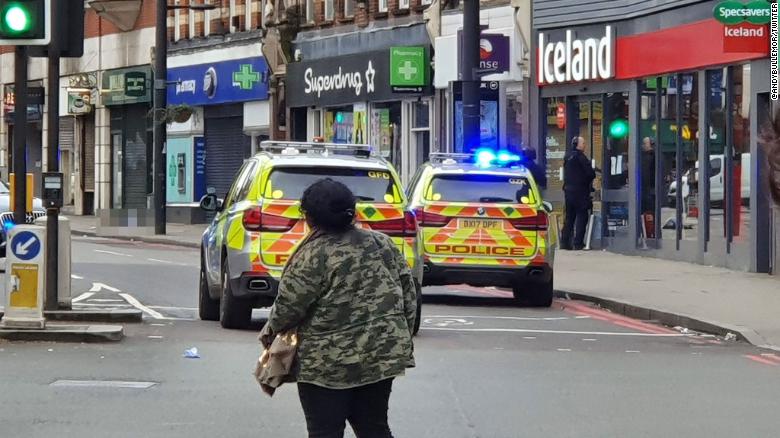 Image from the scene where a man has been shot by armed officers in Streatham. Due to the graphic nature of the scene, CNN has blurred the body of the suspect.
London Mayor Sadiq Khan said he was being briefed on the situation and was in touch with the Metropolitan Police and local representatives. "Terrorists seek to divide us and to destroy our way of life -- here in London, we will never let them succeed," Khan tweeted.
Johnson thanked the emergency services responding to the incident in Streatham. "My thoughts are with the injured and all those affected," the Prime Minister tweeted.
Streatham Member of Parliament Bell Ribeiro-Addy told CNN that the attack in her constituency is "very sad and also quite scary." She said Streatham is a "wonderful community, extremely diverse and we haven't had an issue like this, as far back as I can remember and I've lived here my entire life."
Videos shared on social media showed a number of ambulance and police cars at the scene.

Armed police and ambulances all over #streatham 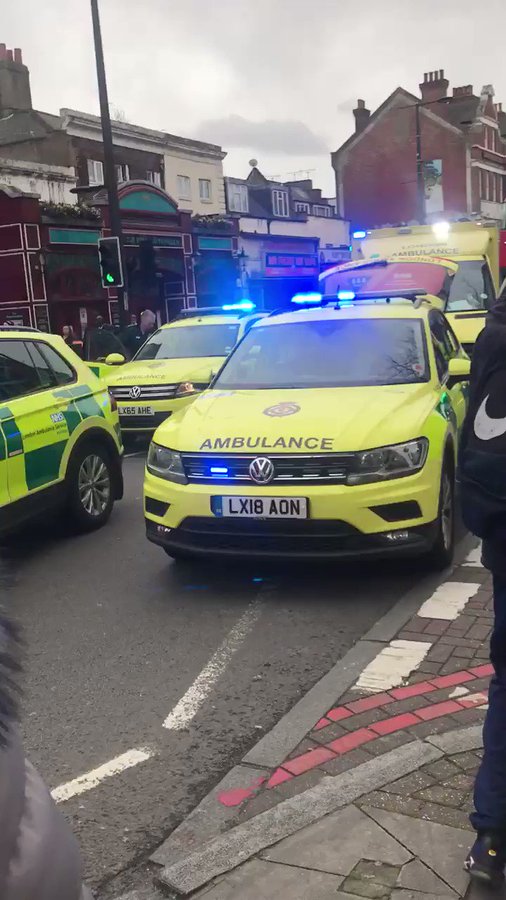 Local resident Dan Smith, who was at the scene, told CNN he saw a medevac helicopter landing on Tooting Common outside his flat.
"On the High Road there was a huge police presence and a wave of ambulances/paramedics arriving. Armed police behind the cordon and everyone was told to remove back," he told CNN in a message.
Streatham High Road is a busy shopping street. Police have told people to stay away from the area and "use restraint in circulating pictures and videos" of the incident, including images of the officers involved.
The road remained closed even after police said the incident was contained.
The incident comes just two months after police shot and killed a man on London Bridge in central London after an attack that left two people dead and three others injured.